The Glories of the Feurich Pianos 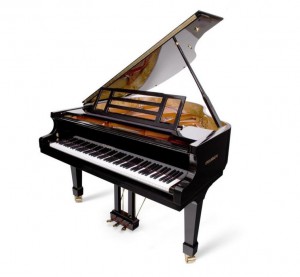 For one and a half centuries, Feurich has been manufacturing premium pianos that produce a warm tone and have a high quality action. The company has always used traditional production methods, but is also open to innovating, as weâll discover.

The Feurich company we know today is a combination of two companies from Austria and Germany. The original Feurich brand combined its experience with Wendl and Lung, an Austrian firm with a youthful approach to music. It manufactures uprights and grands.

When it was first started, it pioneered a technique of placing the dampener under the strings. This is now a normal process, but at the time it was invented in 1851, it was a brand new idea.

At lower price ponts, its pianos are mostly made in Ningbo in China, but donât let this dissuade you: China is known for its child prodigies and incredible pianists who study long hours to master the craft. At the factory, the quality control is still carried out by European staff linked directly to the Feurich name.

We have a selection of upright Feurich pianos available in our showroom.

Feurich wholly owns the factory, and European production methods have been exported en-masse. All instruments are constructed using spruce for the soundboards (from Austria and Bavaria), and the bridge made from seasoned and specially selected timber, capped with maple wood from Germany. Each piano has keys made in Germany.

Since 2012, Feurich has been marketing a new range based on original designs. These will be made in Germany under the supervision of Friedrich Steinbauer and Jan Enzenauer, esteemed piano makers known for their craft and attention to detail.

If you would like to view our Feurich grand pianos we have a selection in our showroom for you to try out.

Feurich is the only company that adds a fourth pedal to its pianos, and it took many years to come into being.

In the mid-1980s, Feurich pursue the idea of a new pedal that would give pianists an increasing range of accessible tones. It created several versions of the pedal, yet it did not appear on a grand piano until 2006. Even then, the instrument could not be purchased. It took Feurich five more years to make its fourth pedal commercially available.

The purpose of the additional pedal is to dampen the note that is played while allowing all other strings to ring out, giving the player a way to access the harmonic qualities of the case and strings. This effect is essentially an added reverb and occurs only when the pedal is pressed halfway.

In addition to its additional pedal, Feurich also adds an ultra-modern silent piano system, the Real Touch Silencer, so that its pianos can be played through headphones. Silent pianos can also play back recorded pieces, either one played by the pianist or pieces downloaded and purchased from third parties. The system can be added to Feurich pianos or pianos from other manufacturers.

Testing one for yourself

If youâre interested in buying a Feurich, or you have a beautiful old model to restore, Piano Workshop would love to hear from you. Come to our piano showroom in Reigate and play any of the pianos at your leisure.