How to Find Middle C on a Piano 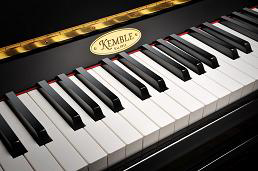 Locating Middle C on the piano

Middle C is also called C4 because itâs the fourth C on a regular 88-key piano. If you use MIDI with a silent piano system, middle C is note 60. It has a frequency of 261.6 Hz, although some inaccurate instruments (such as inexpensive electronic keyboards) may not produce a âtrueâ middle C at this precise frequency. On a piano, middle C is always exactly the same pitch, assuming the instrument has been recently tuned.

Itâs important to know where middle C is if youâre learning, because you need to be able to play every piece in the right pitch. Grand pianos have more keys, so if you show up to a music exam without a good grasp of where middle C is, you might play your pieces in the wrong octave.

Not only will it sound strange if you donât play in the right place, you may ârun outâ of keys mid way through a piece. Also, middle C is usually in the middle, as youâd expect; sitting in the wrong position at a piano can be uncomfortable after a while.

Hereâs how to find middle C with ease â even if you canât really play the piano yet.

Familiarising Yourself With the Piano

Most modern pianos have 88 keys. Some have fewer keys. The 88-key piano became the norm in the late 19th century, and itâs thought that it became common because the pianist could echo practically any instrument in an orchestra.

The trick to finding middle C is to locate the middle of the piano. Look for the group of two and three black notes at the centre.

Middle C is the white note directly to the left of the first sharp in the group.

Other Cs On Your Piano

Once youâve learned to locate middle C, youâll easily be able to locate the rest of the C keys on your piano. On a standard 88-key piano there are 8 C notes. One is the very last key.

Two octaves up from middle C, youâll find C6. C6 is referred to as top C, and itâs useful to know how to locate it if youâre working with a choir. Thatâs because sopranos tend to sing around this range.

On some grand pianos, there are extra notes extending beyond C1 at the bass end. The Boesendorfer 290 Imperial has 97 keys; the extra keys are finished in black and were originally added to mimic organ pipes. For most players, the extra keys are never used but add richness to the tone of the piano when it is played.